The software is used to evaluate gamma spectrometric measurements into production rates, which can then be used in a variety of other calculations, including deconvolution of the neutron spectrum for the measured neutron field. The SW consists of a series of correction functions that are applied during the data evaluation process depending on the user's requirements. Inputs include measured gamma spectra, experiment parameters (radiation end time and duration, beam integral, mass, molar mass, measurement positions and calibration energies for individual spectra, etc.), libraries for used detectors (nonlinearity and efficiency of used HPGe detectors, correction for true cascade coincidence for selected measuring positions), measured and evaluated background for used HPGe detectors, library of gamma energies and gamma transitions intensities.

The amount of inputs used depends on the user, respectively it depends on the available parameters of the gamma spectrometric chain used. However, by omitting some inputs, the uncertainty of the overall result may increase depending on the local conditions in which the spectrometric chain operates, its components and the background shielding. Evaluated spectra, parameters of used samples, selected parameters of the experiment and library of gamma energies and transitions intensities can be considered as necessary inputs.

The content is subject to business secrets (§ 17 to 20 of the Commercial Act); the data are modified to make them public.

License conditions:
Non-exclusive licence is provided in terms of a licence agreement. 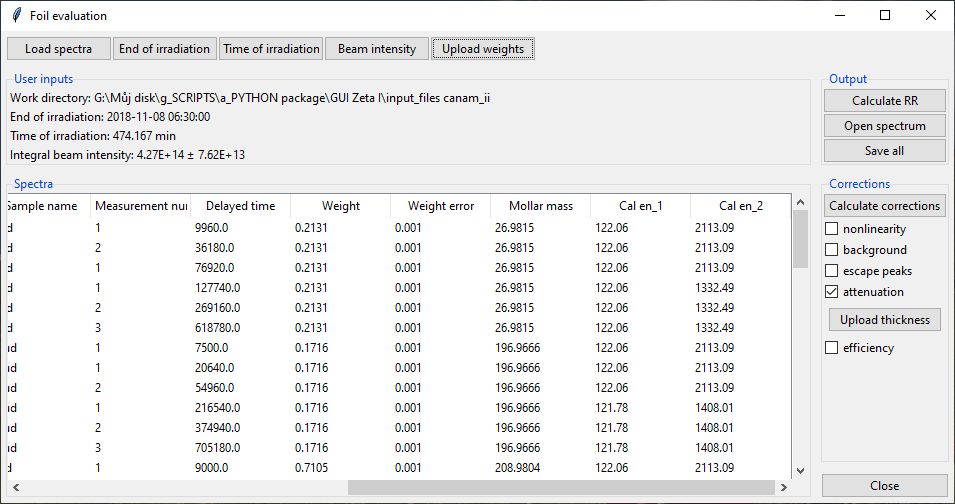 Authors gratefully acknowledge financial support from the Technology Agency of the Czech Republic under project No. TJ01000184 – Analysis of activation detectors for use in systems with high energy neutrons.

Faculty of Electrical Engineering and Communication
BUT Brno